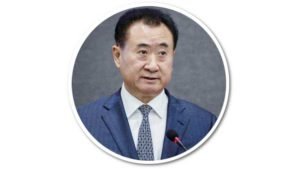 Wang Jianlin is the founder of China’s largest real estate development company Dalian Wanda Group. He is Chinese business tycoon and philanthropist. Wang Jianlin is known as the most honorable citizen of Changchun city and also famous as an “outstanding contributor” to the construction of Dalian city. He also the owner of 20% shares of Spanish football club Atletico Madrid.

Wang served for the People’s Liberation Army for sixteen years and after that, he started to work as Office Administrator for the Xigang District in the city of Dalian. He became General Manager of Xigang Residential Development in 1989. He chaired Dalian Wanda Group from 1992.

1. Wang was the construction consultant of the Guiyang government.
2. Wang’s father served for Mao Zedong’s People Liberation Army.
3. Wang is also the owner of world largest movie theater.
4. Wang is also known as “a man of Napoleonic ambition”.
5. Wang was the richest person in Asia according to Forbes 2016
6. Wang’s personal dictum is “to stay close to government and distant from politics”.