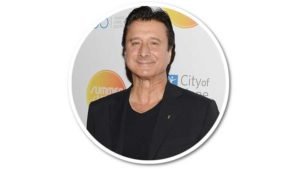 Stephen Ray Perry, an American singer & songwriter, is popular as the lead singer of the rock band Journey. His voice has gathered compliments from major musical peers and publications and also has been called “The Voice”. Rolling Stone magazine ranked him no. 76 on “100 Greatest Singers of All Time” and on April 7, 2017, he was introduced as a member of Journey into the Rock and Roll Hall of Fame.

1. He was nicknamed “The Voice” by Jon Bon Jovi in the ’80s.
2. American Idol judge Randy Jackson described him as “the golden voice.”
3. He was a member of the groups Ice and Alien Project in the ’70s, before Journey.
4. His lyrics to his “Lights” was initially as a tribute to Los Angeles but he later changed the words and meaning of the song as a tribute to San Francisco as Journey was based there.
5. His first solo album, Street Talk (1984), was a big success but his follow up album, Against the Wall, was ultimately shelved.
6. He released a sophomore solo album For the Love of Strange Medicine in 1994.
7. “Young Hearts Forever”, a track off of For the Love of Strange Medicine, was written by him as a tribute to Thin Lizzy singer/bassist Phil Lynott.