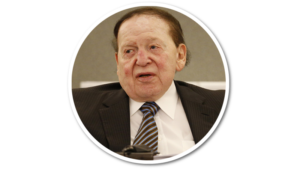 Sheldon Adelson is an American businessman and investor. He is the founder, chairman, and CEO of Las Vegas Sands Corporation and is also the owner of Israel Hayom (Israeli daily newspaper) and Las Vegas Review-Journal. He is a philanthropist and has founded a private charitable foundation known as Adelson Foundation with the help of his wife, Miriam Adelson.

Sheldon Adelson was born in a low-income family, his father drove a taxi and his mother had a knitting shop. He was only 12 years old when he borrowed $1200 from his uncle to purchase the license and sell the newspaper in Boston. At the age of 16, he then started a candy-vending-machine business. By the age of 30, he was a millionaire.

1. Adelson contributed $25 million to Donald Trump’s 2016 presidential campaign.
2. Adelson has founded 50 businesses in his business career.
3. Adelson’s son Mitchell died of the drug overdose so he is against the cannabis legalization.
4. Adelson is against internet-based gambling and has supported the candidates who are against the legalization of online gambling.
5. For his contribution to improving free-market policy in Nevada, Adelson received Chairman’s Award.
6. CNBC’s listed Adelson in 2014 list of 200 people, who have renovated business over last 25 years.
7. Adelson and his wife contributed $250000 each, to the second inauguration of George W. Bush in 2005.
8. Adelson owns a fleet of private jets.