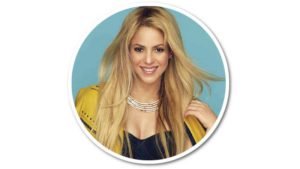 Shakira Isabel Mebarak Ripoll, a Colombian singer, songwriter & dancer, rose to fame in Latin America after Pies Descalzos (1996) and Dónde Están Los Ladrones? (1998), as her first studio albums (Magia and Peligro) failed to gain commercial success in the 1990s. “Whenever, Wherever” was from her fifth album, Laundry Service, which became one of the most successful singles of 2002. She has received 5 MTV Video Music Awards, 2 Grammy Awards, 13 Latin Grammy Awards, 7 Billboard Music Awards, 33 Billboard Latin Music Awards and has been Golden Globe-nominated and also has a star on the Hollywood Walk of Fame.

Shakira attended Catholic schools. She started dancing on the table when she first heard the doumbek which made her realize that she wanted to be a performer. She was rejected for the school choir in second grade because her vibrato was too strong.

1. She knows native Spanish, fluent English and Portuguese and also some Italian, French, Catalan and Arabic.
2. She dislikes alcohol, coffee, candy and even jewelry.
3. 2005–2006 Miss Colombia and model, Valerie Domínguez is her cousin.
4. In 2010, she started her own beauty line “S by Shakira” with parent company Puig.
5. She founded “Pies Descalzos Foundation” in 1995, a charity with schools for poor children.
6. She is fond of history.
7. Her name (feminine of Shakir) means grateful or full of grace.
8. Many Barbie Dolls made by Mattel based on her look.
9. John Lennon’s music significantly influences her.
10. Her beauty staff was once fired as she had become too obsessed with her appearance.