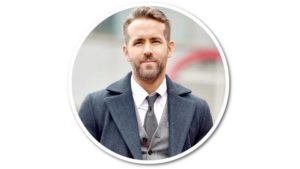 Ryan Reynolds was raised as a Roman Catholic. He graduated in 1994 from Kitsilano Secondary School in Vancouver. He went to Kwantlen Polytechnic University. Ryan Reynolds debuted in Fifteen, a Canadian-produced teen Nickelodeon soap opera.

1. One of his elder brothers works as a member of Royal Canadian Mounted Police (RCMP).
2. While growing up, he played rugby for about nine years.
3. He had his first kiss during sixth or seventh grade with his classmate Deanna.
4. Ryan Reynolds is very optimistic and he thinks if he would not have been so, he would he would have quit in the early stage.
5. He is very good at repairing his motorcycle.
6. Ryan Reynolds is a big admirer of American football team Green Bay Packers.
7. He used to work in a grocery store before becoming an actor.

The balls to my basket.

Ryan Reynolds and an American Actress Blake Lively have been married for 5 years since September 9, 2012.