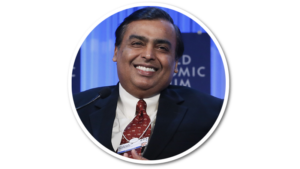 Mukesh Ambani is the richest businessman in India. He is the chairman, managing director and also the largest shareholder of Reliance Industries Limited (RIL) which mainly deals with petrochemicals, oil and gas sectors. Reliance is also one of the most India’s valuable companies and is also a Fortune Global 500 company. He also owns the Indian Premier League and is one of the richest sports owners in the world. According to a research conducted in 2015, he ranked 5th among India’s philanthropists.

Mukesh Ambani was born in a middle-class family. After completing the high school in Mumbai, Mukesh joined Institute of Chemical Technology, Matunga where he received BE degree in Chemical Engineering. Later, he joined Standford University to get an MBA degree but dropout to help his father build Reliance Company.

1. Mukesh Ambani established Reliance Communication Limited.
2. Mukesh Ambani directed and created the world’s largest grassroots petroleum refinery in Jamnagar, India.
3. Mukesh Ambani was accused of pricing irregularities of natural gas from the KG basin in 2014.
4. Mukesh Ambani and his family live in the 27 storey building, Antilia which is one of the most expensive house and is worth $1 billion.
5. Financial Chronicle awarded Mukesh Ambani as “Businessman of the Year” in 2010.
6. Mukesh Ambani ranked 38th on Forbes list and is also the only Indian businessman to be enlisted on this list.
7. Mukesh Ambani’s family used to live in a two-bedroom apartment in Mumbai until the 1970s.
8. Mukesh Ambani is a vegetarian.