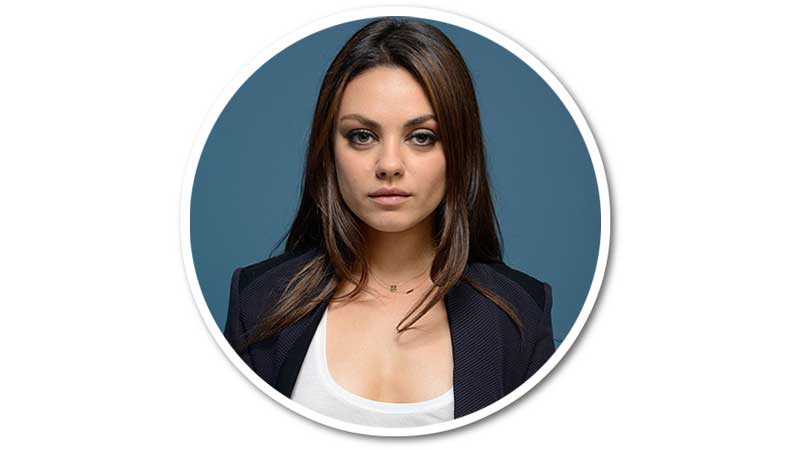 Milena Markovna Kunis, an American actress, first gained recognition from the TV series That ’70s Show. For the animated series Family Guy, she has voiced Meg Griffin. She gained the Marcello Mastroianni Award for Best Young Actor and nominations for the SAG Award and the Golden Globe Award for Best Supporting Actress for her role in Black Swan (2010), Max Payne (2008), The Book of Eli (2010), Friends with Benefits (2011), Ted (2012), Oz the Great and Powerful (2013) as the Wicked Witch of the West, and Bad Moms (2016) are some of her major movies.

She went to Hubert Howe Bancroft Middle School. She attended Los Angeles Center for Enriched Studies (LACES) but later transferred to Fairfax High School because the previous school was not flexible about her acting commitments. She graduated in 2001 from the same school.

1. In 2012, she was in number 9 in FHM’s Top 100 Sexiest Women in the World.
2. In 2012, she was in number 3 in Maxim’s Top 100 Hot Women in the World.
3. She is good friends with Justin Timberlake, Natalie Portman, James Franco, Susan Curtis.
4. Her one eye is green and the other one is blue.
5. She demanded her father not to watch the sex scene that she shared with Natalie Portman in Black Swan (2010).
6. Her family won a lottery when in Russia which allowed them to shift to the USA.
7. She was trained by the S.W.A.T. team to learn how to handle a gun for her movie Max Payne (2008).
8. She used to hate her big eyes and lips because she was taunted by her classmates in school.
9. She is not present on social media.

Ashton Kutcher (2015 – present)
Mila Kunis and an American Actor Ashton Kutcher have been married for 2 years since July 4, 2015.