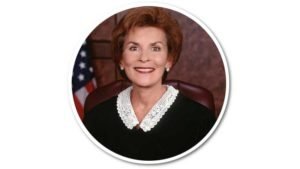 Sheindlin is an American prosecution lawyer, former court judge, television personality, television producer and author. She is famous for the arbitration-based court show series, “Judge Judy”, which also made her renowned as “Judge Judy”. The series also earned her the title, “Court Show Queen”. She has been honored by various awards, including a star on the Hollywood Walk of Fame. In 2013 she was reported to be the highest paid TV star.

In 1965, Sheindlin passed the New York state bar examination and joined a cosmetic firm as a corporate lawyer. In 1982, she was appointed as criminal court judge and four years later she was promoted to supervising judge. She had published her first book, Don’t Pee on My Leg and Tell Me It’s Raining and shortly thereafter was approached by reality courtroom series, featuring real cases which she accepted.

1. Sheindlin’s no-nonsense attitude supported her to be appointed as the criminal court judge.
2. Sheindlin is known as “tough” judge and “fast decision maker”.
3. Sheindlin’s show Judge Judy is the No. 1 rated court show.
4. Sheindlin has been able to place her name in Guinness World Record for being the longest-serving judge in the courtroom-themed program.
5. Sheindlin has written a total of seven books.
6. Sheindlin owns homes in places like Florida, Connecticut, Wyoming, and New York.