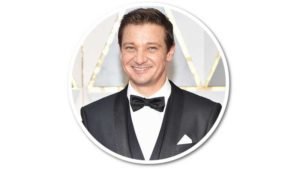 Jeremy Renner graduated in 1989 from Fred C. Beyer High School in Modesto. He studied computer science and criminology at Modesto Junior College. He took a drama class later as an elective and decided to follow acting.

1. He was 10 when his parents got divorced.
2. He runs a house-renovating business with his friend, Kristoffer Winters.
3. He knows Arnis (Filipino martial arts), and Muay Thai (of Thailand).
4. He had to reject a role in The Big Bounce (2004) to appear in S.W.A.T. (2003).
5. He was invited to join AMPAS in 2010.
6. He only reads non-fiction books and mostly architectural books.
7. His first crush was Wonder Woman Lynda Carter.
8. Actors Colin Farrell, Charlize Theron, and Tom Cruise are his good friends.
9. His mother attended Oscars in 2010 and 2011 with him.

Rashida Jones
Jeremy Renner was in a relationship with an American Actress Rashida Jones.