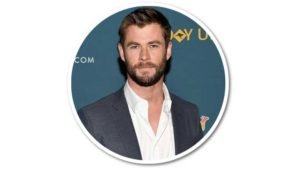 He was raised both in Melbourne and in Bulman. He went to the Heathmont College. He then moved to Phillip Island a few years later.

1. He gave his voice to the video game “Thor: God of Thunder” in 2011.
2. Tom Hiddleston, Sam Perry and Chris Evans are his good friends.
3. He learned acting and American English from “Screenwise Film & TV School for Actors”.
4. He has undergone broad training to gain American accent for Hollywood movies.
5. For the role of Thor, he put on 20 pounds.
6. He was listed as one of the Cosmopolitan Fun and Fearless Men in 2011.

Elsa Pataky (2010 – present)
Chris Hemsworth and a Spanish Actress Elsa Pataky have been married for 7 years since December 26, 2010.